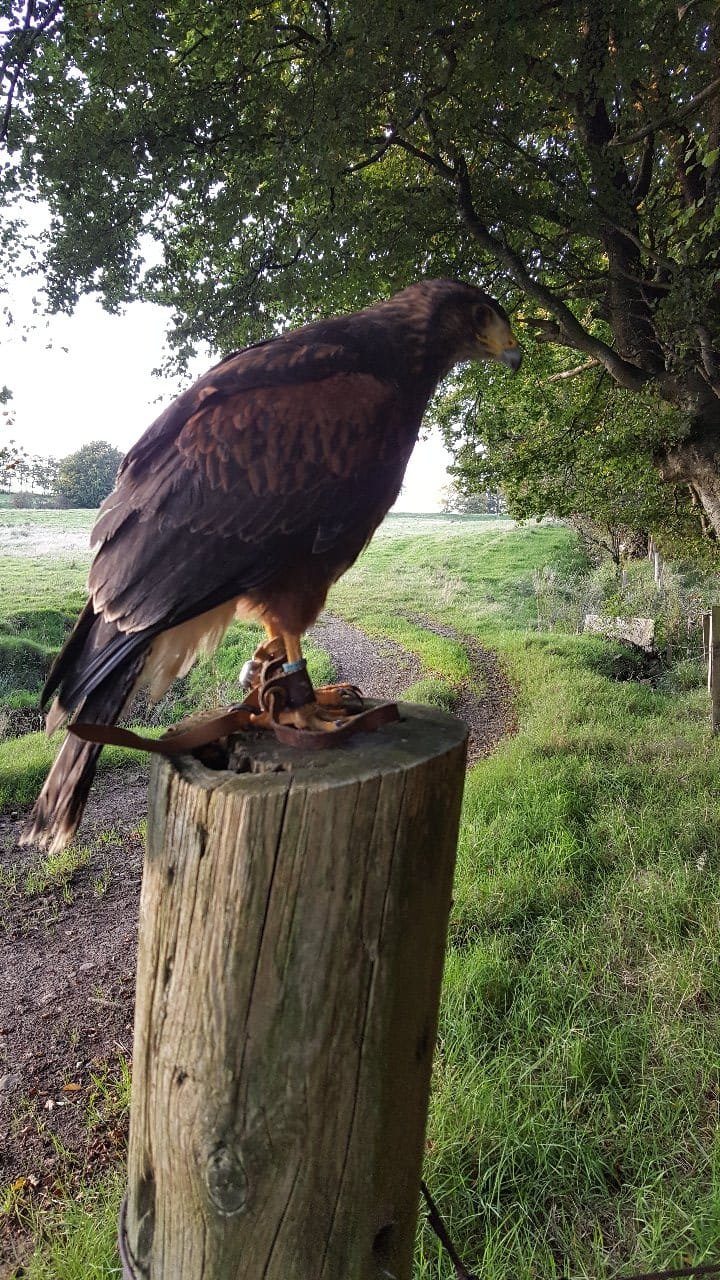 The confusion and the quandary began there. The shocking realisation, the reality before my eyes, that I was in partnership with something that will kill, stunned me a little. The here and now and my dreams of what this moment would be like are utterly miles apart. I have blood on my hands.

In all honestly when I stood above the rabbit hole, knowing the bunny had tricked me and fled to safety, my body flushed with relief. I had seen the guile, watched the predatory instinct, marvelled at his speed. I was at the centre of my own wildlife documentary, with added sensory overload.

My excitement over the chase and its bloodless finish was lost of my falconry compatriots. Not lost, maybe, that’s harsh, but the knowing silence and half-hearted smiles that greeted me upon telling my story of the chase, and ultimately my joy at the rabbit’s escape, just highlighted my own naivety. Deep down I knew it too. Such a situation would soon happen again, and death was inevitable.

I’d be lying too, if I wasn’t honest in saying that the chase had sparked something new in me. I couldn’t quite put it into words, but it was there, residing and growing in my chest. As I had sprinted across the field my desire for the prey to escape had been met head on with something primal, visceral. It was a base urge, an instinct, slowly awakening, at odds with my modern life. In the days that passed since the near miss I could feel it sharpening and keening. It held a sway that was surprising, it was both new and ageless. It was going toe to toe with my lifelong desires to protect and shelter animals.

So, how do I put this? A desire for blood coursed through me. Subconciously, I think it had always been there. Dormant.

The near miss brought it to the surface and I spent the following days in real flux. In flying Chabhair I’d got to a place I’d always wanted to go, but the destination felt wildly different. I was, in truth, wholly uncomfortable.

The pleasure and victory of bringing a wild hawk to the point of hunting its own food, the absolute essence of falconry – something that had felt like necromancy for many years past – was now on the very cusp of my reality. What had felt impossible was now in my grasp. If I could take the final step I could legitimately call myself a falconer. Yet, here I was, supposedly at the apex of what I had dreamed of for years and I was unexpectedly deep in a rut and in a situation that was much bigger than me. I was responsible for death. That’s what it boils down to.

I spent days on autopilot. Ghosting my way through my job and family, my mind playing the arguments over time and again. I lived in that field for days.

At this point it became clear. The falconer actually isn’t in charge. My whole concept of falconry had been a mismatch. Man controlled bird I thought. Not at all. Bird tholes man. Bird allows man to facilitate its needs. The second you let the bird go you hand it all control. You can marvel at them, follow them, chase, harry, worry after and call them but ultimately the raptor decides what happens next. This revelation made things abundantly clear.

A kill would come.

With the training Chabhair had received and the access to fields populated with prey, it was a matter of when and how, not if.

In many ways, this eased my worries. The handing over of control to the bird – or the realisation that I had never fully been in control, had brought me to a calming resolution. The death wasn’t on me, I was merely accompanying a hunter in the wild. I didn’t have to do anything to improve his chances (use of ferrets to chase rabbits from burrows is standard practice in falconry for example). I would just let him fly and chase as he would if I wasn’t there. Nature’s opportunist.

My realisation was only hours before the reality.

It happened so quickly. Arriving at our normal spot in the fields above the river Chabhair was free only a matter of seconds, and there was a burst of rage and violence in his movement. Angled aggressively he flew at speed across the field and I jogged to even enter the field and get a view of him. Back towards the same bank of trees and burrows, he flew as though blind to the rest of the universe, such was his speed and determination.

He was hundreds of feet from me now. But as the land begins to dip towards the river I am still afforded a look. He was utterly low, brushing the long grass, concealing himself amongst it whilst still arrowing forward.

I am holding my breath I notice. My heart beats with the urgency of his wings. The feathers thud in my mind, smothering thought. I feel his desire and I know it is coming.

There is no sign of prey from where I stand. Low, low, low he continues, then together, at once, a rabbit’s tail flashes and Chabhair rockets upwards.

For a beautiful millisecond he is still in the air and I can marvel at his beauty amidst the rage, frozen mid-turn before he descends. Wings now tucked in, he drops, an arrow devil spearing the land below. And the rabbit.

I hear it squeal and I know this time is different.

I swim in a euphoria of sadness and pride.

I am quickly there. The scene stuns me. The colour of blood is so deeply staining. He is already eating. Still quick and efficient, even in the aftermath. I stand my distance and let him eat. His beak is purple, his eyes still afire. Like embers.

I breathe in. There is silence. The world is calm, only the soft sounds of the nearby river and of Chabhair pulling at his prey. In that moment both are somehow relaxing.

Published by The Mindful Falconer's Journal

A meditating falconer and the story of my first hawk Chabhair. View all posts by The Mindful Falconer's Journal